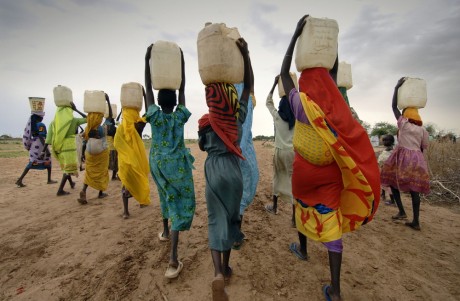 It is a widely known fact that women are disproportionately affected by the climate crisis as they are directly connected to natural resources and their management. In most communities, water collection, food production, wood collection and more are still done by women exclusively. Hence, scientists believe that it is imperative to view all areas of environmental research through gender-lens.

“As climate change continues to make water sources volatile and scarce, women and marginalised groups stand to lose the most due to their position within water dynamics,” Martina Angela Caretta, feminist geographer and senior lecturer at Sweden’s Lund University, told PTI.

Caretta, the coordinating lead author of the chapter on ‘water’ for the 2nd working group of United Nation’s Intergovernmental Panel on Climate Change (IPCC), said women are particularly affected due to their exclusion from decision-making roles in water management and irrigation.

“Water as a means of agricultural production is dominated by men through a hydro-patriarchy, meaning that the subordination of women in male-dominated societies and communities is reflected in the water sector. This unequal access manifests itself in the act of water fetching, in which the distances travelled for water will increase, health conditions for women will worsen, and they will become more dependent on male figures for income,” the feminist geographer explained.

Debra Roberts, head of the sustainable and resilient city initiatives unit in eThekwini municipality in Durban, South Africa, agreed. According to her, young girls and women are deprived of social standing in many instances, from not being taught how to swim, to their lack of access to education opportunities, limiting their adaptive capacity amidst the climate crisis.

Women are also disproportionately affected by environmental degradation due to industrial mining operations across the globe. Citing her earlier research along with Sofia Zaragocin at Universidad de San Francisco in Ecuador, Caretta said the large-scale extraction of water for mining in South America is linked to territory dispossession, contamination, and an increase in gender-based violence, “all of which directly affect women.”

“In particular, indigenous women are affected by these impacts to water as they are constructed as guardians of culture and natural resources, in addition to being mothers,” she explained.

In order to challenge these inequities, the climate scientist asserted that it is essential to uplift and recognise the ongoing, active organis ing that women in Latin America do against these extractive industries. She said that the experiences of women in such communities need to be incorporated into decision-making processes, “whether these are city council meetings or World Bank reports.”

Advertisement
Roberts agreed, adding that it is critical for scientists to understand the people and social systems that use their findings.

“That is why understanding politics and history should be a prerequisite for anyone working in the applied sciences. That understanding of the relationship between science and society has stayed with me and informed my subsequent career in climate change science,” Roberts told PTI.

“How to break the power hierarchy, and how to build equity? How can every adaptation and mitigation project, sustainable development projects break gender-blindness?,” aks Professor Joyashree Roy from the Department of Energy, Environment, and Climate at the Asian Institute of Technology in Thailand.

Caretta added that scholars need to have a better awareness of their privileges, and the unequal power dynamics between their research participants ‘in the field’ and themselves.

“I might be biased, but I do believe that all geographers should be feminist geographers. By adding a layer of research into the lived experience and subjectivities of humans, we can better understand and inform environmental interactions,” she explained.

One way to overcome the unequal impacts of the climate crisis would be to have more women scientists studying its effects, believes Roy.  “Women currently make up less than 30 per cent of researchers worldwide and recent studies have found that women in STEM fields publish less, are paid less for their research, and do not progress as far as men in their careers,” she told PTI.

The COVID-19 pandemic has added to these woes, according to Caretta. “The pandemic has turned the clock of gender equality back considerably. During the pandemic male scholars have capitalised on working from home to produce article after article for publication, while women scientists carry the double burden of housework and professional work,” the Lund University lecturer added.

Roy is hopeful of better progress, heading into the future. “IPCC is making rapid progress in breaking away from this stereotype and trying multiple ways to get the best scientists to improve this balance. Climate change talk needs to be in our everyday discussion if we as humanity want to avoid the worst impact. Similar is the case of the gender divide,” Roy said.