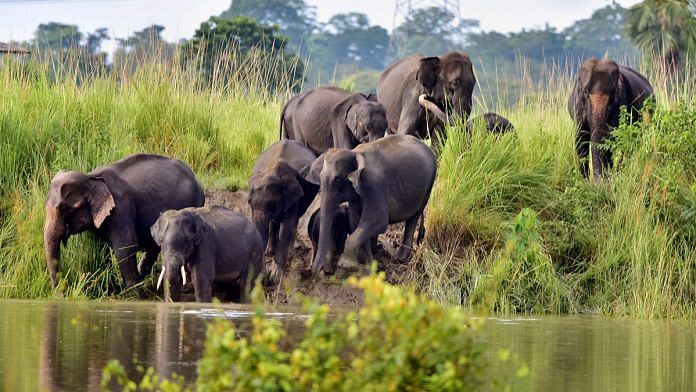 Large land mammals like elephants, big cats, giraffes, hippos, and rhinos are only found in South Asia and Africa today. Earlier they existed globally but now this megafauna — animals that weigh over 50kg — went extinct in most parts of the world, in a 50,000-year-long process called the Late Quaternary extinction.

A new collaborative study from Yale University, Smithsonian’s National Museum of Natural History, George Mason University, and the University of Nebraska, based on data from 51 fossil sites in today’s India, documented the Late Quaternary megafauna extinction in India. The paper shows that the extinction rate in India and Africa over the past 50,000 years is 2.5 times slower than in South America, and nearly 4 times slower than in North America, Europe, Madagascar, and Australia. It found that megafauna persisted in India, just like in Africa, for at least 20,000 years in the presence of hominins or early Homo sapiens relatives.

This lays emphasis on the co-evolution hypothesis that states early human cousins and megafauna lived together, as observed in Africa. It is the first study to explore the extinction of megafauna in the Indian subcontinent in detail and documents a mere handful of large animals that are found extinct in the fossil record.

“The most significant part of the study is that for the first time, we have quantified the megafaunal extinction in India,” said Dr. Advait Jukar, lead author on the paper and Gaylord Donnelley Fellow at Yale University. “While people have been fascinated with this extinction since the days of (Charles) Darwin and (Alfred Russel) Wallace (who jointly produced the theory of evolution by natural selection), and paleontologists, ecologists and archaeologists have been studying this extinction around the world for over three decades, India has remained an enigma until now,” he said.

North America, Europe, Australia, and other higher latitudes, saw the complete extinction of many well-recognised megafauna such as the 250 kg saber-toothed tiger, the 600 kg woolly mammoth, the whopping 7,000 kg mastodon, and even the 70 kg dire wolf. However, in the fossil record of the Indian subcontinent, only a few megafauna were found to have gone extinct, while most others have evolved to smaller sizes today.

The team documented the extinction of a total of seven large species in India in the past 30,000 years. Four of these were the largest: Palaeoloxodon namadicus or the Asian straight-tusked elephant; Stegodon namadicus, another elephant relative with long tusks; Hexaprotodon sp., a family of hippopotamus relatives; and Equus namadicus, a kind of prehistoric horse. These four extinctions make up only four per cent of Indian megafauna and about one-fifth of mammalian megafauna.

They also noted the local extinction of the ostrich, which has no surviving descendants in the subcontinent today, but is still found in other parts of the world. The ostrich was led to extinction here due to overuse of their eggs by humans for food or ornamental purposes.

The seventh species the researchers document is a baboon-like primate Theropithecus cf. T. gelada, but since it could not be dated and might be older than 70,000 years, it was left out of the analyses.

The low magnitude extinction of these six megafauna in the subcontinent began about 30,000 years ago. The Stegodon is thought to have disappeared approximately then, and the most recent extinction was that of the Hexaprotodon 8,000 years ago.

The exact cause for their extinction cannot be narrowed down to a single prime reason, such as overhunting as with megafauna extinction elsewhere.

“We have ample evidence of the butchery and hunting of mammoths, mastodons, bison, horses, and camels in North America,” explained Jukar. “We also have a lot of evidence of animal processing and consumption in Africa from both old and young fossil records. The challenge with India is that we have no evidence of butchery or hunting, but then again, ef forts to look for this evidence have been limited compared to North America for instance. India’s tropical climate also makes fossil preservation difficult, which adds a further complication,” he added.

Breeding and drought: Larger species reproduce slowly with longer gestation periods and pregnancies, and larger gaps between births. They also birth fewer individuals in a litter. Under conditions of drought, breeding becomes even slower, and fossil evidence indicates that these animals survived several drought-like conditions.

Range of habitat: Another factor is the animals’ limited range. While modern mammals lived across Southeast Asia, the extinct animals’ ranges were confined to the Subcontinent. This reduces the overall metapopulation or pockets of populations of the same species to a small geographic area, increasing their risk of extinction.

Climatic change: The Late Quaternary experienced both strengthening and weakening monsoons in India, driven by three major cold, dry events in higher latitudes — the Last Glacial Maximum (LGM) 20,000 years ago where the ice sheets were at their greatest extent, the Heinrich event 1 where large glaciers broke off in the Atlantic about 16,000 years ago, and the Younger Dryas around 11,000 years ago, which saw a return to more cooling after the warming post-LGM.

Human impact: As with elsewhere in the world, the authors stress, human causes behind the extinction was still the biggest contributing factor, as the megafauna survived other unfavourable conditions over millennia. The authors attribute the increased rates of extinction and ultimate decline of each species to sophisticated hunting technology (such as projectiles), which could have been the ultimate push.

“We can infer that environmental and biological factors were necessary but not sufficient because these species had survived millennia of environmental change. Human activity was the last nail in their coffin, ” said Jukar.

After early humans left Africa and entered the subcontinent, they co-existed with the megafauna for at least 20,000 years before extinctions.

“What is really interesting is that we record the longest time-lag between the arrival of Homo sapiens and the extinction of large species,” said Jukar. “This is in contrast with what we see in the Americas, Europe, and Australia, where the extinctions proceed more rapidly after the arrival of our species.”

The findings provide the first independent evidence for the co-evolution hypothesis, which was until now only confined to Africa. It states that the magnitude of an extinction is inversely correlated with the amount of time large mammals coexisted with modern humans and human ancestors. This essentially means the more time animals and humans co-existed, fewer species went extinct.

So hominins and large mammals would have both adapted to each other’s existence and behaviours, including the evolution of anti-predatory tactics by animals. Additionally, fossil evidence indicates that humans in India preferred to hunt smaller creatures, and were also domesticating cattle for dairy, indicating evolving dietary lifestyles away from hunting large animals. This theory is further strengthened by the fact that Asia’s extinction rate is similar to that of Africa, where humans first evolved alongside other animals, according to the researchers.

Jukar explained that the findings will have major implications for conservation today because all the factors that led to these extinctions are being accelerated at unprecedented rates now.

This includes confining animals to increasingly smaller habitats because of human encroachment, which leads to loss of genetic diversity that can protect against extinction. Hunting and poaching pose a great threat to slow-breeding animals like elephants and rhinos.

Unfavourable environmental conditions typically cause an entire species to move to a suitable habitat, called a refugium, to survive difficult times. However, animals are now unable to disperse to refugia, explained Jukar.

Today, climate change is accelerating at speeds not seen before in the last four million years, he said, adding, “At the rate at which we are going, it’s going to be hard for species to cope.”