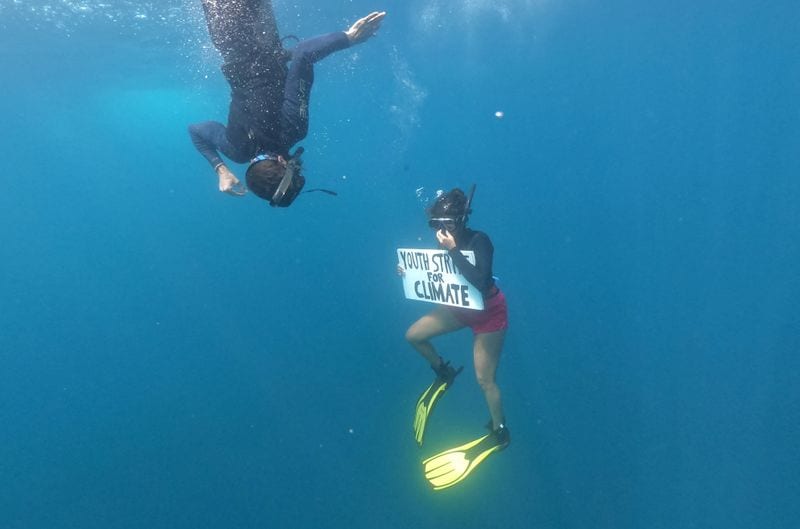 The vast stretch of seagrass at the Saya de Malha Bank has become a priority for conservation partly for its role in absorbing climate-warming carbon dioxide.

In a remote stretch of the western Indian Ocean, a 24-year-old Mauritian marine scientist donned a snorkel and dived below the choppy waves to float in protest above the world’s largest seagrass meadow.

The vast stretch of seagrass at the Saya de Malha Bank has become a priority for conservation partly for its role in absorbing climate-warming carbon dioxide. Elsewhere, the world is losing some 7% of its seagrass cover per year due to dredging, rising ocean temperatures, and other factors.

Thousands of marine species also rely on the Saya de Malha seagrasses for food and habitat, including endangered green sea turtles and rabbitfish, a crucial species for artisanal fisheries in the region.

“There is a lot of life in the ocean that we don’t know exists and which is magical. It shouldn’t be suffering because of the decisions that other people are making,” Sandooyea said on the deck of a Greenpeace boat, called Arctic Sunrise, while sailing out to the area with scientists and environmentalists in early March.

The campaigners are hoping to draw attention to a UN goal of persuading countries to protect at least 30% of the planet’s land and ocean by 2030 – an interim target that many scientists say must be met to address the dual crises of climate change and biodiversity loss.

For Sandooyea, the Saya de Malha is also part of her home. The island nation of Mauritius shares jurisdiction over the surrounding seabed with Seychelles. But while the remoteness of the seagrass fields hundreds of miles from shore has provided some protection up to now, the young activist scientist worries that could change if oceans become busier.

Global shipping traffic increased four-fold between 1992 and 2012 with the Indian Ocean seeing one of the sharpest rises, according to a 2014 study in Geophysical Research Letters.

Meanwhile, Mauritius is also still grappling with its worst-ever ecological disaster, caused in July when a Japanese ship hit a coral reef and spilled some 1,000 tonnes of oil into aquamarine waters that then washed up onto beaches.

Against the backdrop of such events, Sandooyea said she felt compelled as a teenager to become an activist: “It was simply unacceptable to see no action, no concrete action.”

India Will Cooperate Globally To Prevent Extinction Of Migratory Birds

Study Finds That Humans Can Transmit Covid-19 Virus To Wildlife