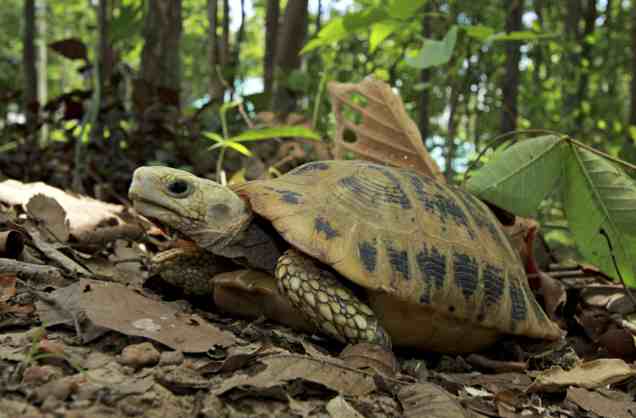 More than 90 percent of the habitat of the elongated tortoise falls outside the protected area (PA) network in the Indian subcontinent. Experts in India and Bangladesh rely on community-based conservation to conserve the critically endangered species in the region.

Experts believe that prioritizing components of ecosystems, such as leaf litter on the forest floor and streams, in addition to updating wildlife protection laws, are needed for better conservation.

The species (Indotestudo elongata), with its yellowish-brown to olive shell with black blotches, is broadly distributed across northern and northeastern India, Bangladesh, Nepal, Bhutan, Thailand, Vietnam, Cambodia, Laos, and Malaysia.

A modeling study published this year by researchers from the Wildlife Institute of India on the known range of the species in India (Assam, Bihar, Jharkhand, Meghalaya, Mizoram, Odisha, Sikkim, Tripura, Uttarakhand, Uttar  Pradesh, West Bengal), Nepal, Bhutan, and Bangladesh provides the first predictive map of I. elongata distribution for the Indian subcontinent. The study area covers about 1,731,135 square kilometers.

“PAs are considered as the cornerstone of biodiversity conservation. However, little is known about the effectiveness of PAs in safeguarding poorly known yet highly threatened biodiversity such as that of tortoises,”  said co-author Abhijit Das of the Wildlife Institute of India. 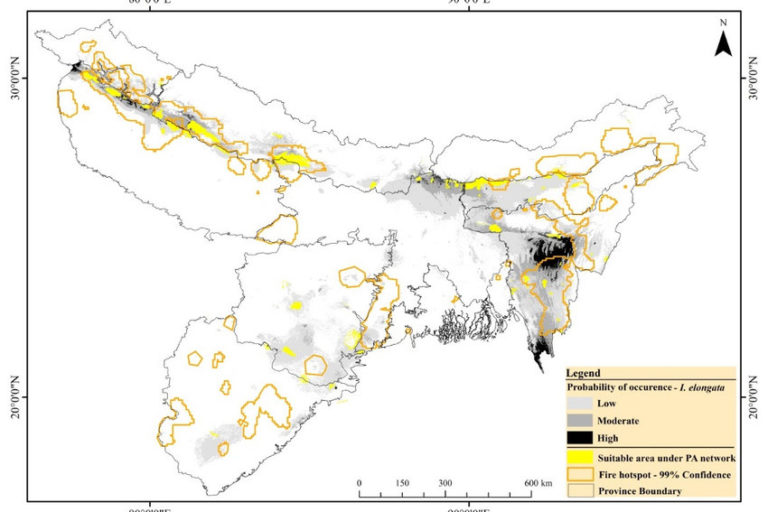 Only eight percent of the potential distribution of the species falls within the current protected areas network in the study area. Image from Das et. al. 2020.

The species also called the Sal forest tortoise, normally occurs in open deciduous forest patches, including Sal (Shorea robusta) and evergreen forest habitats, dry thorn forests, and savannah grasslands. The species is threatened with habitat loss, forest fires, and over-exploitation. Several studies have pointed out that catastrophic forest fires and clearing of grass and leaf litter by setting fires by locals during the dry season are destroying the microhabitats of these creatures.

In the recent Brazilian Amazon fires, researchers came across forest floor tortoises and [turtles] with burns scars on their shells. According to the India State of Forest Report 2019, over 30,000 incidents of forest fires were reported in India in 2019. In India, over 95 percent of fire incidences are of human origin. The dry deciduous forests, which receive low rainfall, face 5-6 dry months, and have nutrient-poor soil, are more vulnerable to fire compared to others.

In India, the Sal forest tortoise is one of the 29 species (24 turtles + 5 tortoises) of freshwater tortoise and turtles and is listed under schedule IV of the Wildlife Protection Act. It is listed in Appendix II (as Testudinidae spp.) of Convention on International Trade in Endangered Species of Flora and Fauna (CITES).

“This perhaps is the only tortoise species in the Indian subcontinent that has the largest geographical distribution. However, everywhere it is rare. That makes it more vulnerable because the population is impacted anywhere in its large distribution range. Because it is rare, there is hardly any international trafficking, but it is locally hunted, especially in northeast India and Southeast Asia. Besides, this species lays very few eggs (maximum 7); thus, they are so vulnerable. Although a critically endangered species, yet in India, it is considered under schedule IV of Wildlife Protection Act,”  said Das.

The researchers recommended the enforcement of community-based conservation and awareness programs and sustainable resource use to safeguard the habitat of the species outside protected areas.

Forest fire a major threat to the elongated tortoise

Forest fire is known to be a major threat to these slow-moving creatures. For example, in some studies, living tortoises were found to bear fire scars covering up to two-thirds of their carapace surface. Researchers found that  29 percent of the predicted distribution of the species falls within high occurrence fire zones.

The majority of the fires (from 2000 and 2016) in the study area took place from February to May (winter season) peaking in March. In northeast India, particularly, slash and burn cultivation (jhum) may have a large impact on the species. This is because, in recent years, the frequency of the jhum cycle has increased, leading to more frequent clear burning of the forest floor.

The identification of fire hot spots is useful from a policy standpoint. For example, the Northeast Hill province (including the Sylhet and Chittagong Divisions of Bangladesh) is more fire-prone than other regions and most of the suitable area for the species in this province falls outside the protected area network.

“This tortoise is not actually distributed in the Himalayas but in the foothills such as in Terai, Duars and in the northeast up to southeast Asia. During the dry season (February-April) this species of tortoise takes refuge in thick leaf litter or in dry stream bed (where moisture content is high). Unfortunately, that is the time when maximum forest fires occur,” said Das. 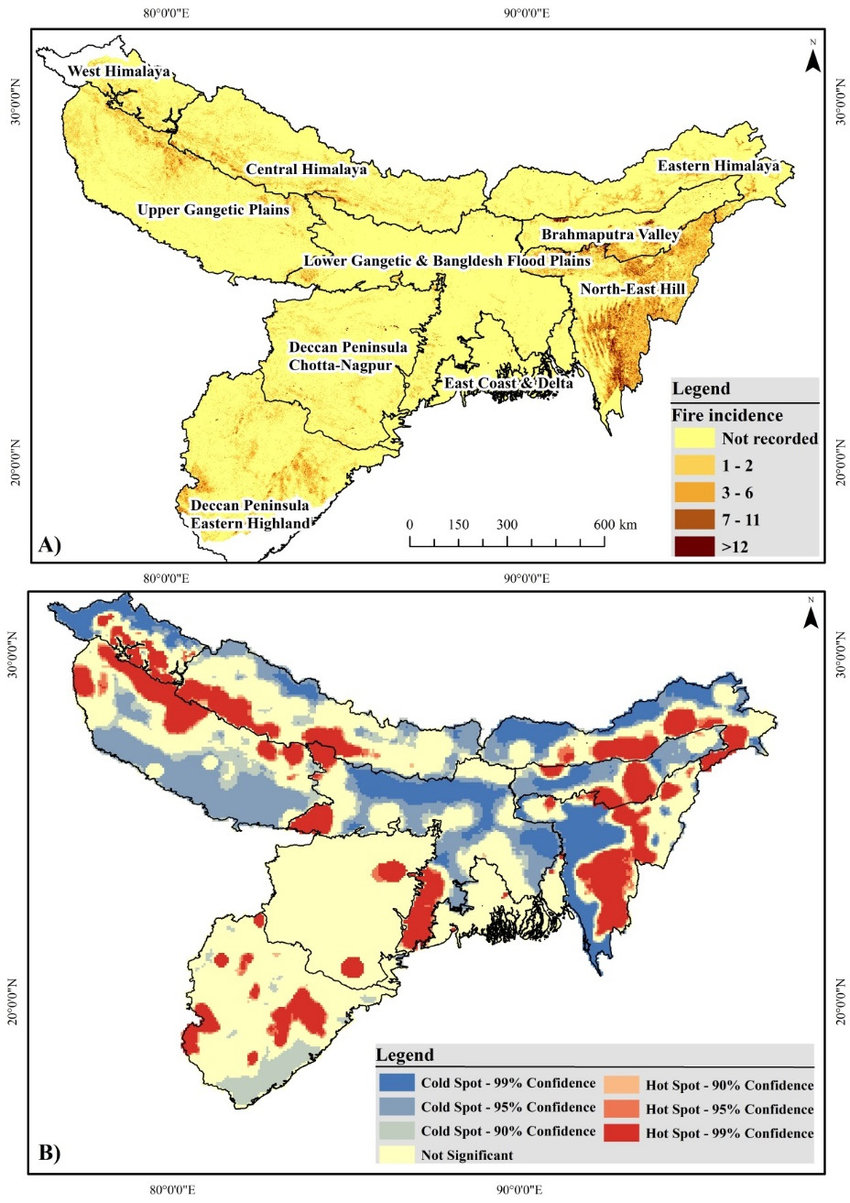 In the Northeast Hills province, fire from slash-and-burn-cultivation is a major threat to the species. Image from Das et.al. 2020

In Bangladesh, where the species is protected under schedule III of the Bangladesh Wildlife (Preservation) Act, conservation biologist Shahriar Caesar Rahman has carried out extensive work, including telemetry studies on the elongated tortoise in his country. The tortoise is found in the northeastern and southeastern parts of Bangladesh. A large part of elongated tortoise habitat in Bangladesh falls within the Chittagong Hill Tracts, a hilly terrain inhabited by 11 indigenous communities. The indigenous communities in the area practice slash-and-burn (jhum) and rely on subsistence hunting.

“The situation is very similar to northeastern Indian states as well. Therefore, I believe community-based conservation should be more applicable for conserving elongated tortoise, and other imperiled turtle and tortoise species, in Bangladesh and NE India,” said Rahman, who was not associated with the study.

While the telemetry work on the elongated tortoise was done in the NE of Bangladesh in a protected area called Lawachara National Park, Rahman and colleagues also have a program running in the Chittagong Hill Tracts where they are supporting communities through different livelihood initiatives. One such initiative is Schools for Conservation which provides free primary education services for local communities.

“When the communities see they are getting benefit from a conservation project then they are motivated to take action such as cease hunting of tortoises and ensure the protection of their community-managed forest to provide suitable habitat for conservation of elongated tortoises and other highly imperiled species. We also train former hunters and recruit them as parabiologists who monitor the area for hunting and they are also responsible for conducting studies such as camera trapping, radio tracking, etc.,” added Rahman.

With the help of the communities and trained parabiologists, they have rescued over 130 specimens of turtles and tortoises belonging to five different species including the critically endangered Asian giant tortoises, Arakan forest turtle, keeled box turtle, and elongated tortoises.

“With some of the rescued tortoises specimens, we have established a captive breeding center with the goal of increasing their number in captivity and releasing the offspring back in the wild to help bolster the wild population. We have already successfully bred the Asian giant tortoises and we plan to start our reintroduction effort in the next year. We haven’t bred elongated tortoises yet but we hope we will breed them soon and in the future, we would be able to release captive-bred elongated tortoises back in the wild as well,” he said. 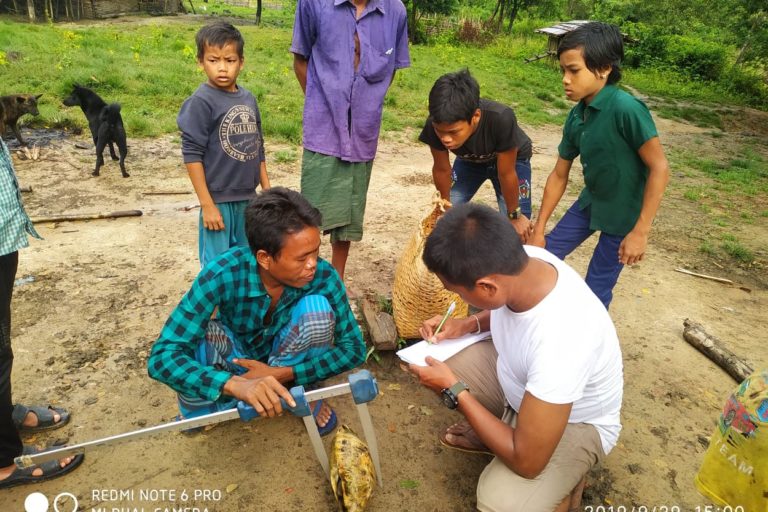 However, Rahman also cautions against the “one size fits all” approach, stressing on balance between community involvement, governance, and law enforcement.

“I would say that while the community-based conservation approach is crucial for protecting freshwater turtles and tortoises in south Asia, it is also necessary to understand that every conservation tool has its shortcomings and one size doesn’t fit all. Therefore, the involvement of government agencies and enforcement is also necessary to ensure a balance between top-down and bottom-up approaches. We can exchange knowledge, share experiences, and apply for funding together for sure for both countries,” he said.

Assam-based herpetologist Jayaditya Purkayastha who was not associated with the study said along with community-based conservation and general awareness programs, awareness on legal implication is very important for enforcement agencies for this species in specific and turtles in general.

“One of the main deterrents of rhino poaching is the penalties associated with it. Unfortunately for lesser-known animals, though there are legal penalties, on the ground these are seldom imposed. The Wildlife Protection Act, 1972 needs to be updated as more and more species such as the Sal forest tortoise should be given a higher level of protection,” said Purkayastha.

Shailendra Singh, Program Head of Turtle Survival Alliance India who was not a part of the study agreed that fragmented habitats need to be connected through more community forest and participatory monitoring and models such as around the Chitwan community forest can be replicated around other areas too.

“We also need to strengthen the capacity of range states (mainly Nepal) and work with them in collaboration Indian counterparts under programs like Strengthening Regional Cooperation for Wildlife Protection in Asia (SRCWP) and SAARC (South Asian Association of Regional Cooperation) and tiger conservation programs,” he added.

“We have made significant progress towards landscape-level conservation, especially from the tiger conservation perspective. We are talking about corridor and connectivity and metapopulation dynamics. However, that’s fine and that’s perhaps needed for our national animal. However, we should also emphasise an ecosystem-level approach. Reptiles and amphibians are representatives of some special ecosystems. Streams, leaf litter, swamps, canopy also need to be prioritised,” Das added.

Innovation Is The Weapon Of Choice

Yawning Is Contagious Among Elephants Too – Study