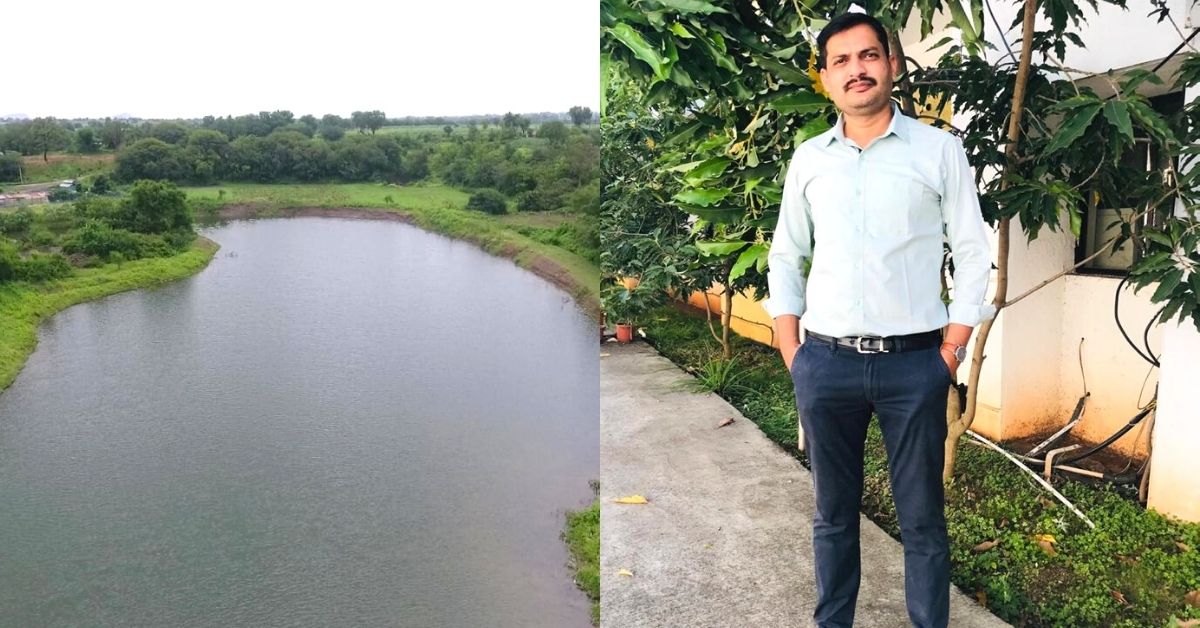 Out of the eight borewells that Dattatray Kharade dug in his 2.5-acre farmland between 2008 and 2014, seven dried up. But, for the past two years, all of the borewells have had surplus water in them.

Dattatray is a 50-year-old farmer from Dahigaon village in the Satara district of Maharashtra. He said that he had “never witnessed plentiful groundwater in the village borewells his entire life”.

What changed in the past couple of years?

Dahigaon with its 3,500 residents, along with surrounding villages in a 100-km radius, has always suffered from water issues. Falling in the rain shadow region, the farmers in the villages could not experiment with a wide variety of crops and depended entirely on the mercy of the rain gods.

But a human resource professional and a native of the village, Yogesh Chavan decided to change it all.

“As an HR professional working in Pune, I always received applications from youngsters in the village seeking job opportunities. Unfortunately, with the increasing competition and limited positions in my company, I always felt helpless and disappointed for not being able to help them,” Yogesh said.

However, during his visit in 2016 to the village, he decided to do something for the village youngsters that could potentially create more opportunities in the village itself.

Harvesting water in a crematorium

The first step to build a rainwater harvesting project is to build a shed. The rainwater is then channelized, filtered through various natural filtration systems, and stored in water tanks or returned to borewells. Students from the National Service Scheme (NSS) visited the village and the shed was completed as a part of their project.

The following monsoon, they succeeded in increasing the water levels of a single well by harvesting the rainwater from the crematorium project. Motivated by this small success, the same experiment was repeated in four other houses in the village.

In 2017, Yogesh’s group, along with some villagers who realized the importance of water conservation, decided to scale up the drive. The villagers collected Rs 18 lakh through personal contributions and donations from local organizations.

“Some like-minded people wanting to volunteer, teamed up to repair leakages, replace broken doors and take up other pending work to prevent losses from a KT Weir (small water dam) on the river Vasana that flows through the village,” Yogesh said.

He said that an 800-meter stretch along the river was selected to carry out desolation, widening the riverbank, and other water conservation measures to increase the water carrying capacity of the river.

How to save a million liters of water 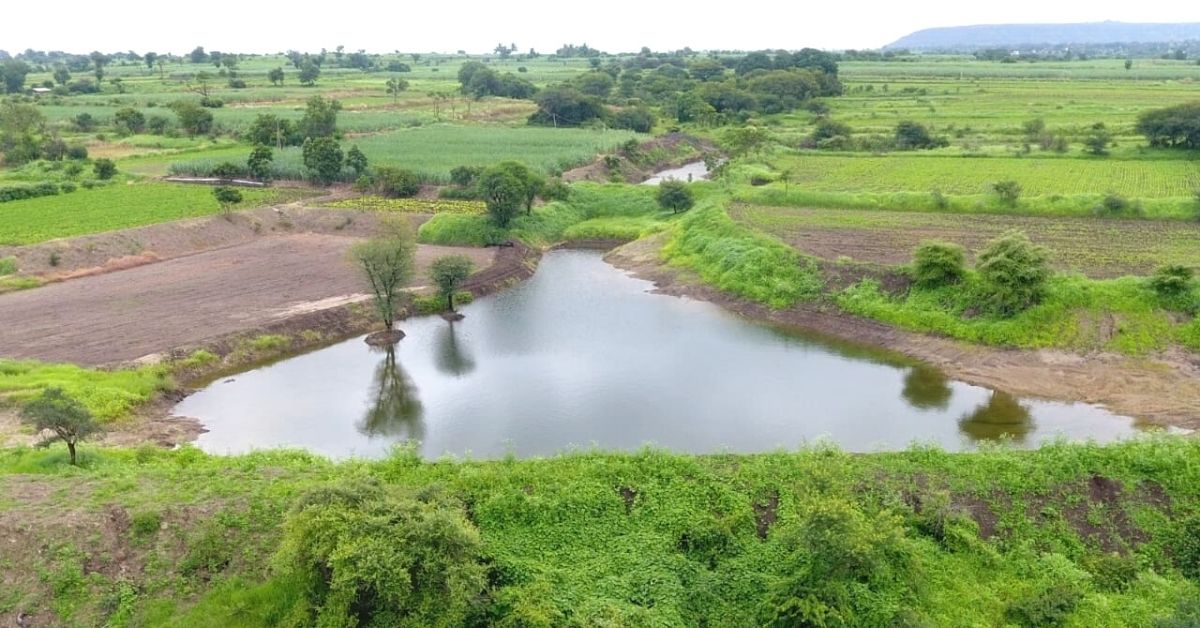 The following year Yogesh managed to seek Rs 25 lakh from different companies under their corporate social responsibility (CSR) projects. Through these funds, experts, engineers, and volunteers were roped in.

“Seeking CSR funds was difficult, as not many companies easily trust water conservation initiatives because the immediate results are not visible. Gaining the trust and confidence of the government officials was another hurdle to cross,” said Yogesh. “In the summer of 2019, we worked on the remaining 800-meter stretch of the river for water conservation. Besides this, 17 check dams on three canals connecting the river were taken up for either construction, repairs, or increasing the water percolation capacity. The overall water arresting capacity in structures increased by 50%. The work involved water conservation from the point the river entered the village until it crossed its boundaries,” Yogesh added.

“The experts took the responsibility for measurements and calculations required for the scientific approach. The engineers estimated to save 29 crore liters of water with the completed work on 75,553 square meters of land. The average depth of the check dams and structures was at 3.85 meters,” he said.

Dattatray says that fortunately there was plenty of rain that year. “The rainwater filled the wells and recharged the groundwater sources. The water in the well that was available at 60-70 feet reached 30 feet. The old water levels of borewells found at 150 feet rose to 70 feet,” he added. 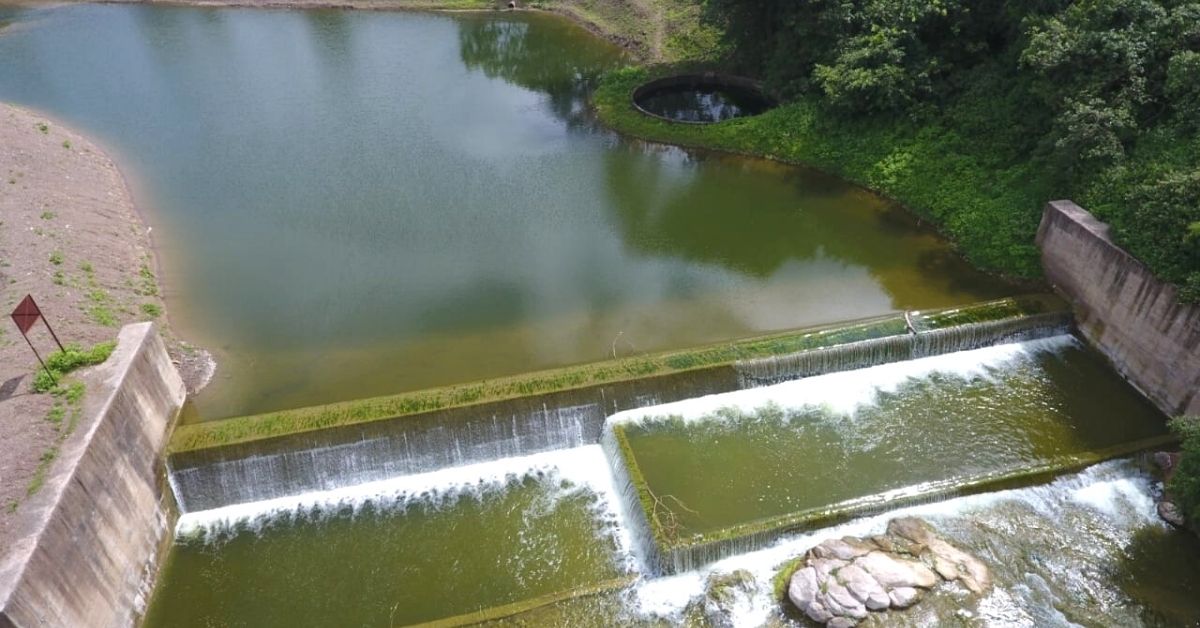 The efforts of the villagers were not only limited to benefit Dahigaon alone but also helped the groundwater levels to increase in neighboring villages like Deur, Anpatwadi, and Ghigewadi.

The immediate effect was that farmers could now cultivate crops on more land, start irrigation, and use the water pumps to extract groundwater that was dry for years.

“The water pump on my ancestral farm could not extract any water since 2013, but for the last two years, the water is available 24×7. A youth group is now experimenting with organic farming for the first time this season. We are working to establish a producer and customer link in Pune. The availability of water will help stop the migration of youth and they could explore job opportunities in the village,” Yogesh said.

Sunanda Chavan, another villager, said that before her sugarcane never grew more than waist level but this year it has scaled way above her head.

“Many people in the village thought that mere excavation of soil and building some bunds would not help. But they failed to realize that it was a scientific approach. Seeing as how the village is not dependent on water tankers anymore, Sunanda adds that she’s been urging people not to wastewater. “I tell as many people as I can that just because the water is available now, they should not waste it. It is a precious asset, and we need to use it wisely,” she added.

You May Be Harming The Planet While Working From Home

Land Under Hastinapur Wildlife Sanctuary Proposed To Be Reduced.

Green Hydrogen Is A Lot More Than You Know