A large group of heavily armed masked men buzzed the door of a house in Krasnodar in southwestern Russia shortly before 6 a.m. on Nov. 18. The house serves as an informal office for Environmental Watch for Northern Caucasus (EWNC), a prominent independent environmental group.

For years this group had monitored environmental issues in that region, including sensitive topics such as the impact of the 2014 Sochi Winter Olympic Games and other questionable construction and infrastructure projects.

The head of EWNC, Andrey Rudomakha called out to the men outside saying he was coming to open the door but they broke down the door and grabbed Rudomakha, and put him and another activist face down on the floor.

The intruders turned out to be a special police unit who took away computers, hard drives, flashcards from cameras, and the environmentalists’ personal phones.

The search lasted five hours. Rudomakha managed to call his lawyer, but the police did not allow the lawyer to enter the office. When Rudomakha was taken away by police for questioning, his lawyer was not allowed to accompany him either. 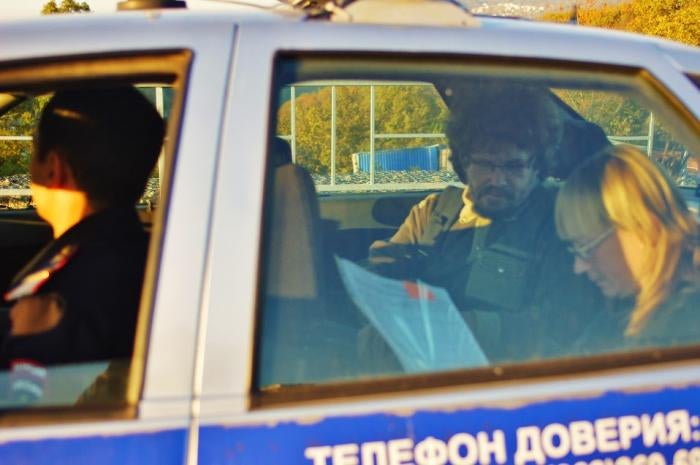 Detention of Andrey Rudomakha on October 31, 2014, © 2013 Environmental Watch of the North Caucasus

What happened to EWNC is a prime example of the pressure facing environmental rights groups in Russia today, as they come under severe harassment from authorities and their staff and supporters are targeted. The problems seem to be particularly acute in the Krasnodar region.

Rudomakha was informed that he is a witness in a criminal case against a local activist, Leonid Malyavin, a pensioner accused of participating in the activities of the civic movement Open Russia, which the government has labeled an  “undesirable organization.”

The Investigative Committee, Russia’s main criminal investigation service, opened a criminal case against Malyavin in early November for reposting on his social media account an August 2019 article about a scientific breakthrough from the Open Media online outlet. In July 2020, a local magistrate ruled that Open Russia conducts its activities in Russia under 11 different names, including Open Media.

Rudomakha was told he was a witness because he and Malyavin were friends on Facebook, even though Rudomakha has nearly 4,300, and Malyavin just under 2,000 friends and they hadn’t seen each other for over 18 months.

This was a sufficiently urgent threat to the public or national security by the police to justify the early morning raid but this is not the first raid that EWNC and Rudomakha have experienced.

According to him, the organization has been raided seven times since 2016 and the last four used the same methods; very early in the morning, armed masked men, breaking doors, excessive violence, confiscating all electronics. Three of them were in 2019.

Two were related to criminal cases against local activists who were also allegedly connected with Open Russia. Interestingly, in both cases, the raids of the suspects’ and other witnesses’ houses were conducted in a low-key manner and without armed masked men. It seems the raids involving full force have only been used on the EWNC premises.

All this raises the question of whether the raids on EWNC were in genuine pursuit of a criminal investigation or simply an opportunity to target and harass environmental activists. The computers and other electronics confiscated during previous raids are released months later, effectively undermining and paralyzing the work of the organization.

Rudomakha told that perhaps the goal is to strangle his organization.

EWNC is trying to fight back, contesting the legality of the previous raids. Only one legal challenge yielded success, but the organization intends to challenge the most recent November raid as well.

Local authorities have attempted to label EWNC “foreign agents” under the abusive law that makes it much harder for groups to operate, but in a rare win, EWNC succeeded in getting those decisions quashed in higher courts.

The authorities also went after EWNC and Rudomakha with “undesirables” charges because of an interview he gave to MBKh Media which, according to the local magistrate, is one of Open Russia’s “avatars.” Their lawyer successfully defended the organization against those charges, but Rudomakha was fined.

Moreover, while law enforcement and prosecutors are so involved in supposed “crimes” of the EWNC and Rudomakha, actual crimes against them are not effectively investigated.

The investigation into a 2017 violent attack on Rudomakha that landed him in the hospital has still not yielded any results, even though the attackers were caught on a CCTV camera. The attackers also made mobile calls that should have been traceable, and forensic experts found a fingerprint and other evidence. Still, the police claim to be unable to identify the suspects.

Likewise, an investigation into a 2016 attack on a joint EWNC and Greenpeace Russia environmental camp in Krasnodar was closed in late 2018 without anyone being held responsible.

Environmental activists in the Krasnodar region and in particular EWNC are certainly among the most targeted and harassed environmental groups in the country, but they are not alone. During the declared “Year of Ecology” in Russia in 2017, at least 14 environmental nongovernmental organizations were either shut down or suspended all work as a result of the “foreign agent” law.

Russian federal and local Krasnodar authorities need to revise their priorities and focus on protecting and assisting the important work of civic society activists instead of continuing to harass and intimidate them and cover-up for those who attack them.

Microplastics Have Now Made Its Way Into The Fetus

Protect the Forest To Save The Bees And The Community