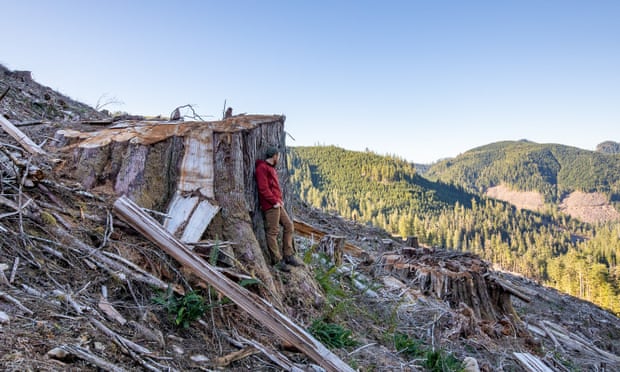 Ancient Forest Alliance’s (AFA)  project underscores the preventions that are needed to protect old-growth trees in areas such as the Caycuse watershed.

When TJ Watt first stood at the base of a towering western red cedar on Canada’s Pacific coast, the ancient giant was surrounded by thick moss and ferns, and the sounds of a vibrant forest ecosystem. But when he returned a few months later, all that remained was a massive stump, set against a landscape that was unrecognizable.

“To come back and see a place that was so magnificent and complex just completely and utterly destroyed is just gut-wrenching,” he said.

Watt’s photographs of the forest, and the grim aftermath of deforestation, are now the centerpiece of a campaign by the Ancient Forest Alliance to capture the impact of clearcutting old-growth trees in British Columbia. Despite recent efforts by the province to protect these fragile forests, conservationists say far more is needed to prevent the collapse of ecosystems.

A forest in the Caycuse watershed was lush and vibrant before it was logged. Photograph: TJ Watt

Watt has photographed clear-cuts in the province for more than a decade with the AFA but said the “graveyard of stumps” in the Caycuse watershed remains a jarring sight.

“We’re in the midst of a global climate environmental crisis yet here in Canada, a first world country, we’re allowing the destruction of some of the most highly endangered old-growth forests on the planet,” he said. “A lot of people are shocked that that’s still happening here. It’s not illegal. The government sanctions it.”

Conservation groups have fought for decades to protect some of the oldest trees in the country. Campaigners won a major victory in September after the province of British Columbia agreed to implement 14 recommendations from the Old Growth Strategic Review over the next three years.

The panel called on the province to defer logging old-growth forests in nine areas throughout the province, protecting 352,739 hectares (871,600 acres) until a formal plan is developed. But as critics point out, only about 1% of the deferred areas is previously unprotected old-growth forest.

“There’s a huge gap between the quality of the recommendations and initial steps the government took. That means that 99% of the work still remains to be done,” said Jens Wieting of the Sierra Club of BC, pointing out that deferral areas contain only 1% of the most at-risk ecosystems.

Both Watt and Wieting have called on the government to both protect the remaining old-growth forests and to help forestry-dependent communities so they can transition away from old-growth logging. They also say Indigenous peoples must have a role in protecting and managing the forest.

“I’m going to keep taking these ‘before’ photos,” said Watt. “And it’s up to politicians if there’s going to be an ‘after’ shot.”