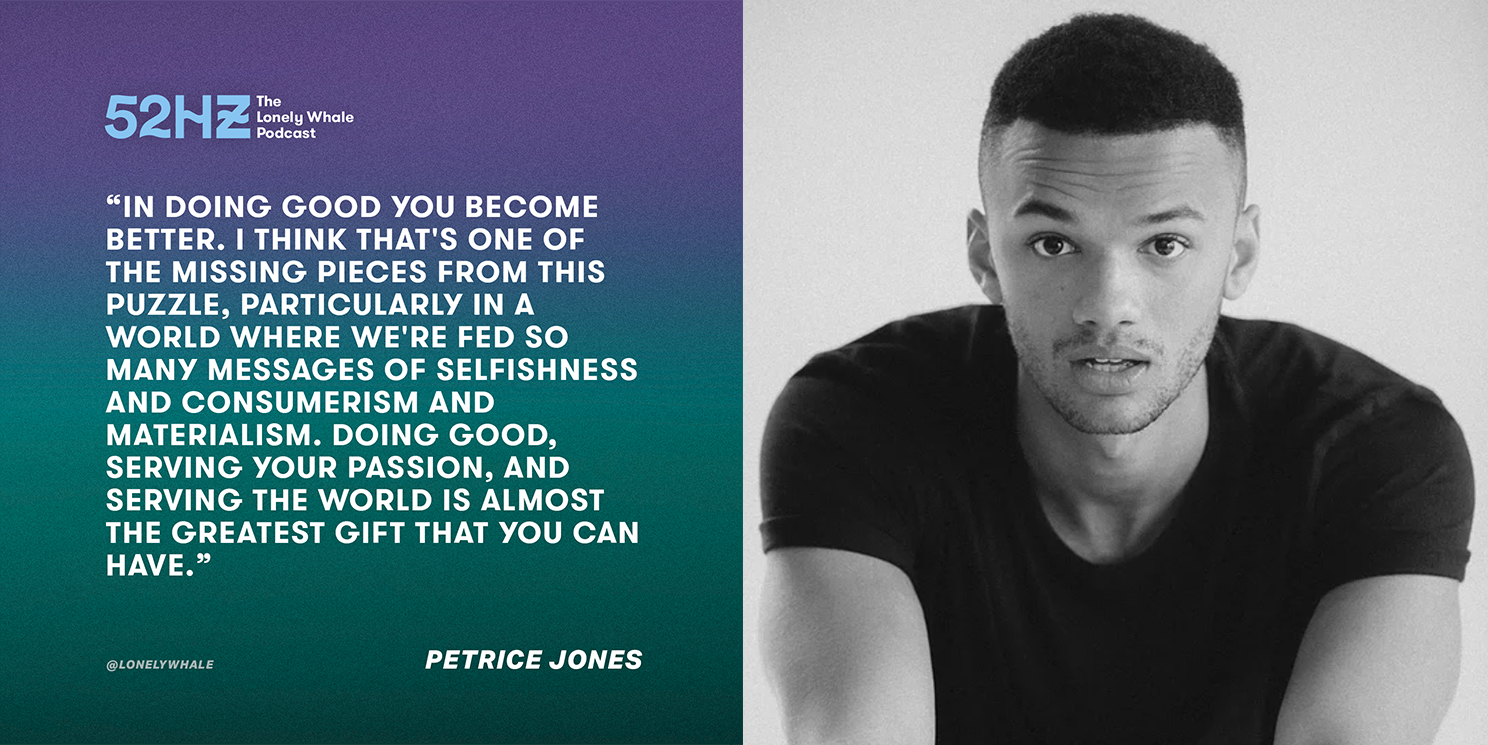 Apart from being the ultra-talented star of Netflix’s new hit show Locke & Key, Petrice Jones is also an eco-warrior. The British actor is the brains behind The One Movement, a social enterprise aiming to educate, empower, and support people fighting to protect our planet. He joined forces with Lonely Whale, an organization dedicated to caring for our oceans, to host the 52 Hertz podcast series about climate optimism.

The climate optimist raises awareness about global environmental issues like plastic pollution on 52 Hertz and his social media platforms. Architectural Digest spoke with Jones about the need to elevate BIPOC voices in the environmental movement, how the climate impacts BIPOC communities, and what keeps him hopeful amongst the chaos.

AD: What inspired you to host the Lonely Whale podcast series, 52 Hertz, about climate optimism?

Jones: Collaborating with Lonely Whale was a no-brainer for me. Our mission is the same: We want to mobilize an audience that creates daily habits that are better for the planet and to help others understand that their voice and their actions, no matter how small, can make a difference.

The first season of 52 Hertz elevates the voices of those who are finding truly innovative approaches to the problem. By highlighting unique efforts within the ocean conservation space, we uncover the many ways that others—no matter their age, background, or industry—can challenge the status quo and create genuine impact.

Hearing people’s stories made me want to take things further, I started asking myself what else I could do. Understanding that we’re not separate from our environment but rather part of it is fundamental to calculate the “true cost” of any endeavor. If you think of yourself as separate from the environment, you may think that the true cost is one that’s personal or financial. The true cost is one that considers both the financial and environmental factors.

What is the intersection of the environmental movement and the BIPOC community?

Wanjiku “Wawa” Gatheru of Black Girl Environmentalist, a supportive community for Black girls, womxn, and nonbinary environmentalists, is definitely an inspiration to me. Her focus on the need to disrupt the status quo within the environmental movement, and calling for the movement to center the experience and expertise of frontline people of color, especially Black and brown people who have been historically left out, is truly admirable work.

So, the environment is a civil justice issue?

Intersectional environmentalism is a movement that advocates for justice for both the Earth and communities of color. It’s about protecting people and the planet, recognizing that by harming the planet, we’re harming our most vulnerable communities.

Intersectional environmentalism isn’t just an idea or something we can talk about or debate as a concept. Studies have shown

Advertisement
that communities of color are disproportionately exposed to poor water and air quality. Zanagee Artis, the cofounder of Zero Hour, and I talk a lot about the importance of prioritizing the environment when we vote in episode 11 of 52 Hertz. Because climate change is an intersectional issue, everything from health care and foreign policy to war relate back to the environment and impacts climate change in the future.

Protecting marine wildlife and natural habitats is a necessary part of the environmental movement, but it’s time to recognize that protecting our own neighbors is equally, if not more, important. Environmental racism can look like building hazardous waste facilities or ignoring contaminated groundwater in nonwhite neighborhoods. Intersectional environmentalism comes into play when we talk about environmental racism because it includes fighting for the policies and regulations that protect the planet and its people.

Why do we need to diversify the environmental movement?

When people think of an environmentalist or those involved in the environmental movement, there’s a very specific kind of person that comes to mind. But the fact is, anyone and everyone can get involved, regardless of age, experience, or background. Being an environmentalist is about so much more than just caring about conservation and our physical planet. It’s also about our love for humanity. We’re all being impacted by environmental crises and climate change. It’s all of our responsibility to step up as environmental leaders and take action. Diversifying the movement breaks down these barriers and allows us to join together through our efforts to save the future of our shared planet.

What keeps you optimistic about the future of our planet?

Despite everything going on right now, I’m hopeful for our environment because 2020 has been a year of action—for taking to the streets, for signing petitions, for demanding accountability, for voting in elections at every level, for educating those around you, for fighting for what’s right and never stopping because it’s what’s right. Public demand for the health of our planet is rising, and with this momentum growing, decision-makers can’t continue to ignore our voices. It’s also incredibly inspiring to see more and more young people get involved in the movement and become leaders themselves. It keeps me motivated in my fight for the next generation.

As a young Black man, I’ve spent much of my career searching for my face amid the environmental movement, and sometimes I couldn’t help but feel alone or frustrated. I’m thankful to the people who are mobilizing and putting in work to make this a space for everyone, whether it be through protesting, the decisions they make as consumers, or the pursuit of education.

Your power is with your vote, your wallet, and your voice. Support Black businesses and environmental-focused businesses. We have to keep pushing, and we have to go further because the environment deserves it.