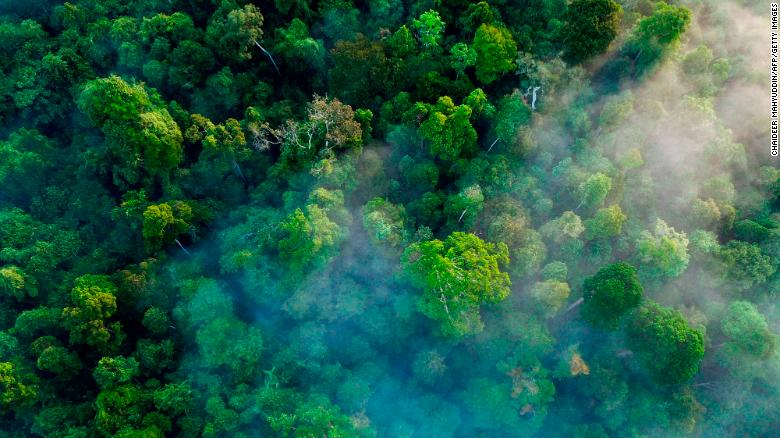 Last week, Indonesia’s parliament passed a controversial and sweeping jobs law that environmentalists say will have a disastrous impact on the country’s forests and rich biodiversity.

The law was intended to simplify Indonesia’s complex web of overlapping regulations to make it easier for companies to do business in the country. It includes changes to more than 70 laws across the labor, business, and environmental sectors.

Thousands of people have taken to the streets in the capital Jakarta and other cities in a three-day national strike against the reforms, with demonstrators, labor unions, and rights groups saying the law undermines workers’ rights. On Thursday, protesters violently clashed with police, who fired tear gas and water cannons in an attempt to disperse crowds in central Jakarta.

Rights group Amnesty International called the law “catastrophic,” saying the bill was rushed through parliament with no meaningful public consultation and criticized the drafting process as opaque. Amnesty’s Indonesia Executive Director Usman Hamid said in a statement that the law will “harm workers’ wallets, job security and their human rights as a whole.”

While the protests have focused on concerns over labor rights, environmentalists say the law loosens environmental protections and could lead to widespread deforestation and habitat loss.

Indonesia’s rainforests are the world’s third-largest after the Amazon and Africa’s Congo Basin and are ecologically important for their rich biodiversity, with animals including elephants, clouded leopards, sun bears, and the critically endangered orangutan. Deforestation is already driving many species toward extinction and environmentalists are concerned the law could give them a “strong push towards the edge,” said Phelim Kine, senior Asia director at environmental campaign group Mighty Earth. 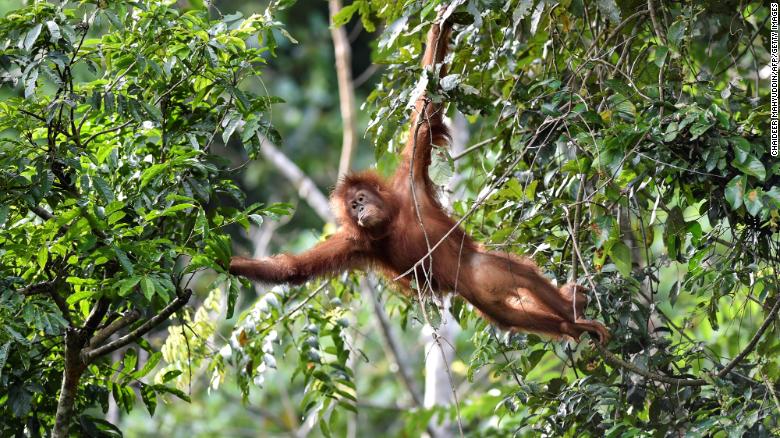 A young Sumatran orangutan swings on a tree at the Pinus Jantho Forest Reserve on June 18, 2019, in Indonesia.

Why environmentalists are worried

Indonesia supplies more than half of the world’s palm oil and the industry contributes about 2.4% to the country’s GDP but it is a major cause of deforestation in Indonesia and palm oil has had a devastating impact on the environment.

The new law will remove a requirement that Indonesian provinces need to have a forest cover of 30%, raising concerns that extractive industries and palm oil plantations could drastically step up land clearance and escalate conflicts over land and Indigenous rights.

Indonesian environmental group the Sustainable Madani Foundation warned that the law will weaken environmental protections for forests and several provinces that are home to palm oil plantations, like Riau, Jambi, and South Sumatra, could completely lose their natural forests in 20 years.

“That’s staggering, that’s the equivalent of telling a United States citizen that an American corporation is going to raze Yosemite, or in the UK that they’ll pave the Lake District. The environmental impacts are almost incalculable,” Kine said. 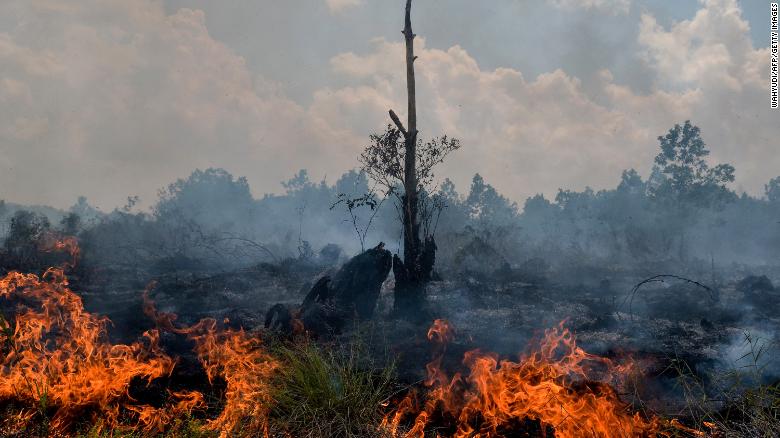 Adding to concerns is that previously, companies were responsible for environmental damage in their concessions, whether they were at fault or not. But environmentalists say these “strict liability” provisions are now vague and proof of wrongdoing is now required to prosecute the company. Environmentalists are worried it will weaken laws aimed at prosecuting companies that cause forest fires.

“We are afraid the changes of the liability mechanism will blur the lines in trial and hamper law enforcement for the forest fire issue,” said Grita Anindarini, a researcher for the Indonesian Center for Environmental Law.

Intense forest fires from land burning rage across Indonesia every year, with toxic haze spreading as far as Malaysia and Singapore. Farmland is burned to prepare for the next year’s crop and to clear forests, with the carbon-rich peat burning for weeks and creating a health crisis with disastrous consequences for the climate crisis.

Indonesia’s Environment Minister Siti Nurbaya Bakar said on Twitter that the rights of Indigenous peoples and those living in forest areas have greater protection under the new law and that obligations for companies to maintain forest areas will in fact be tighter.

Campaigners say the law makes changes to several other key environmental rules, including removing the requirement of environmental reviews before setting up new projects. It also integrates environmental permits with business permits and compliance monitoring will now be “risk-based.”

Companies would previously need to fill out an environmental impact assessment to assess the impact their project would have on the environment and local communities. Now, only companies whose activities pose a “high risk” to the environment will need to secure this license. 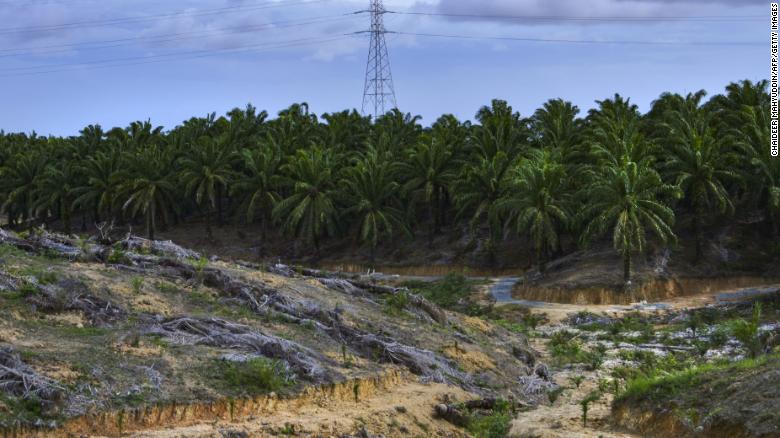 This picture taken on August 16, 2019, shows a palm oil fruit plantation in the Nagan Raya district in Indonesia’s Aceh province.

According to Grita, companies now only need to consult those people “directly impacted” by the project, raising concerns that local people and environmental advocates will be left out of the consultation process. “It’s very unclear who is directly impacted,” she said.

The new rules have raised fears that the system of checks and balances on those polluting or exploiting the environment will be diminished.

But Environment Minister Siti said the law makes it easier for the government to revoke business permits for companies that undermine environmental laws.

“By combining the processing of the AMDAL license with the processing of business permits, if a company violates it, the government can revoke both at once,” the minister said on her official Twitter account. She continued that corporations “playing around” in forest areas will be subject to “strict criminal sanctions.”

Environmentalists say Indonesia could have used the opportunity to recover its economy in a sustainable way.

“They could have made it a golden region for economic green growth with forest cover and biodiversity treated as priceless assets rather than items to be pillaged,” Kine said.

Banks like Citibank and ANZ have said if the jobs law is implemented well, there will be a better investment climate for Indonesia but others within the industry say it may backfire. A group of 35 global investors managing $4.1 trillion in assets issued a letter to the Indonesian government warning of the damaging consequences for the environment.

Grita said that Indonesia’s environmental law is “one of the most progressive laws we have” though implementation and monitoring are still weak. The palm oil industry in particular has come under pressure from buyers, financiers, and civil society groups among others to reduce deforestation and the destruction of peatlands.

Meanwhile, companies are increasingly committing to “No Deforestation, No Peatland, No Exploitation” (NDPE) policies, and major palm oil importers like the European Union and the UK are considering stricter standards for agricultural imports. One UK proposal would prohibit companies that can’t prove their supply chains are not linked to illegal deforestation, and 21 major food firms, including McDonald’s, say the plans should be expanded to apply to all deforestation.

Concerns have also been raised that Indonesia’s new law will move the country’s environmental legislation away from international best practices.

There are calls for the government to repeal the law, and Kine said the focus now will be on ensuring it’s implemented in a way that “mitigates the extent of the damage that the law on its face can inflict.”

Kaziranga National Park To Be Expanded