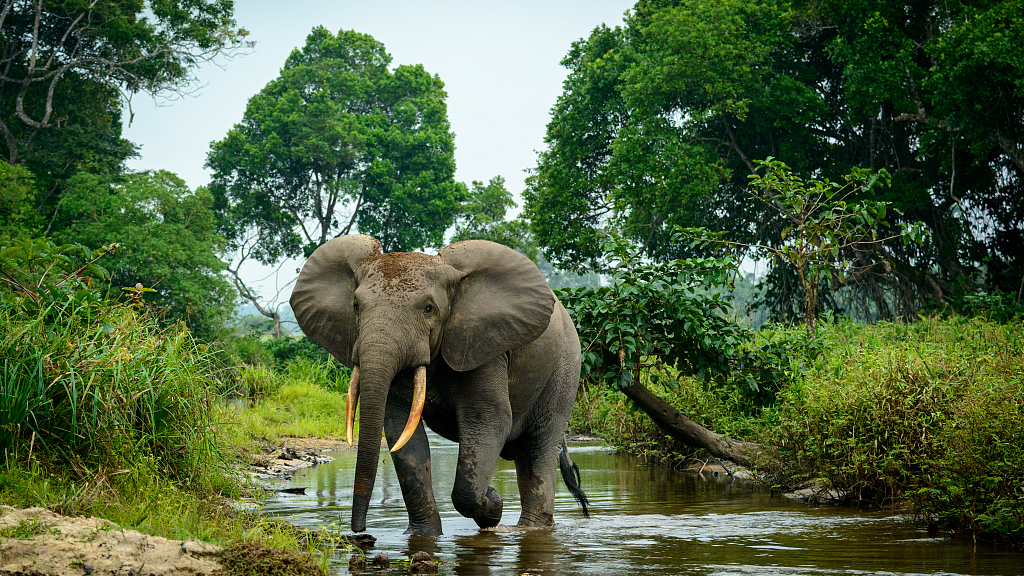 Having lived and farmed in the village of Pematang Pudu village in Bengkalis district, in Indonesia’s Riau province, for more than 20 years, Jumar is no stranger to the presence of elephants. He has seen elephants wandering through his village and fields of sweet potato, and they have never been bothered by the animals.

He says he has seen people throw things at the elephants, and even shoot at them when they catch one eating crops, but he doesn’t recommend it.

“People who mistreat them get their houses destroyed,” Jumar says. “It’s like with people, you can’t mistreat them. They get angry and they crush nearby houses.”

Jumar says he has often had to escort the elephants back into the forest using a flashlight to point the way, but these encounters have grown less frequent in recent years.

“How come we have so few elephants now?” Jumar asks. “Where did they go? I have no idea.” 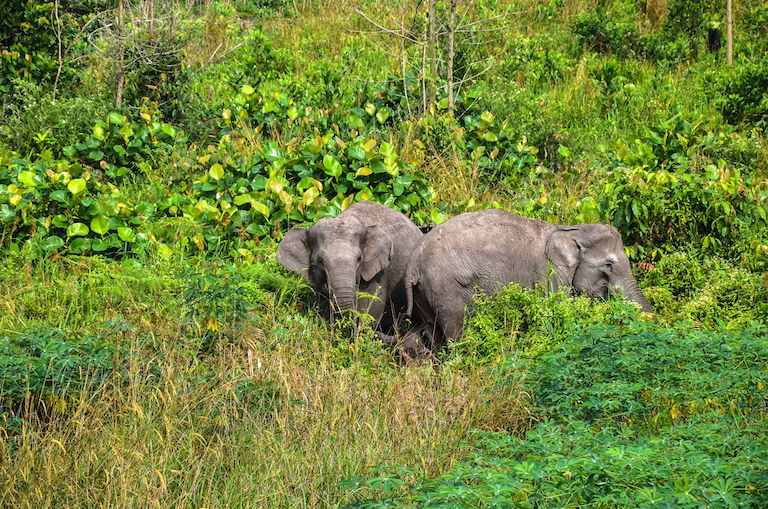 Sumatran elephants inside a cultivated area in Balai Raja. Established as a wildlife reserve in 1986, the area now has less than 200 hectares of intact forest.
Image by Walhyudi/Mongabay Indonesia.

There were 25 elephants in the Balai Raja herd in 2014, according to WWF. By late 2019, only seven remained. A female named Dita, who struggled to recover from wounds inflicted by a snare trap, died in the reserve in October 2019.

“The condition of Balai Raja conservation area is already severe,” says Yuliantony, director of Tesso Nilo National Park, about 230 kilometers (140 miles) south of Balai Raja. He says the loss of habitat isn’t just a result of encroachment by plantations and smallholder farms, but government development as well.

“Not only the people but also the state is responsible,” Yuliantony says. “There is a subdistrict office, a school building, and a scout station as well. If we move them from Balai Raja,” he says, “the uniqueness of the territory will be lost.”

He says one long-term solution would be to relocate the elephants to a fenced sanctuary but adds that this will forever destroy the character of the landscape. 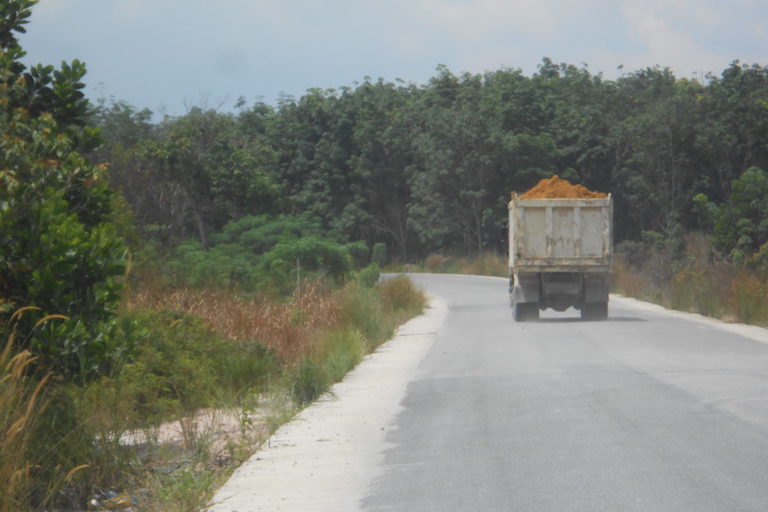 A completed section of the West Duri Ring Road in Balai Raja village. Roads under construction in the Balai Raja area have destroyed intact forests and fragmented the degraded habitats used by elephant herds. Image by Suryadi/Mongabay Indonesia.

Along with plantations and building development, a new road that will eventually connect the major cities of Pekanbaru to the south and Dumai to the north has bisected much of the remaining elephant habitat surrounding the reserve. This construction has both destroyed some of the remaining intact forests as well as fragmented the degraded habit commonly traversed by the herd. Environmental groups have been fighting against this and several other road projects for the last five years, with little success.

Zulhusni Syukri, director of the Sumatra-based Rimba Satwa Foundation, has long been working to prevent the road from destroying elephant habitat. He once confronted the head of the Bengkalis public works department and asked the official whether the government felt any responsibility for the elephants that were coming under increasing pressure because of the road construction.

“He was unable to provide a solution at the time,” says Husni, as he’s known. “He just promised to invite us to discuss the matter formally later … until he was jailed, that is.”

The official, Muhammad Nasir, was sentenced to seven years in prison in August 2019 on corruption charges. He was found guilty of illegally awarding contracts for several road projects.

Husni also tried to approach the Bengkalis district chief, Amril Mukminin but was repeatedly unsuccessful in securing a meeting. Amril was himself later sentenced to six years in prison for accepting 5.2 billion rupiah ($368,000) in bribes related to the road construction scandal. 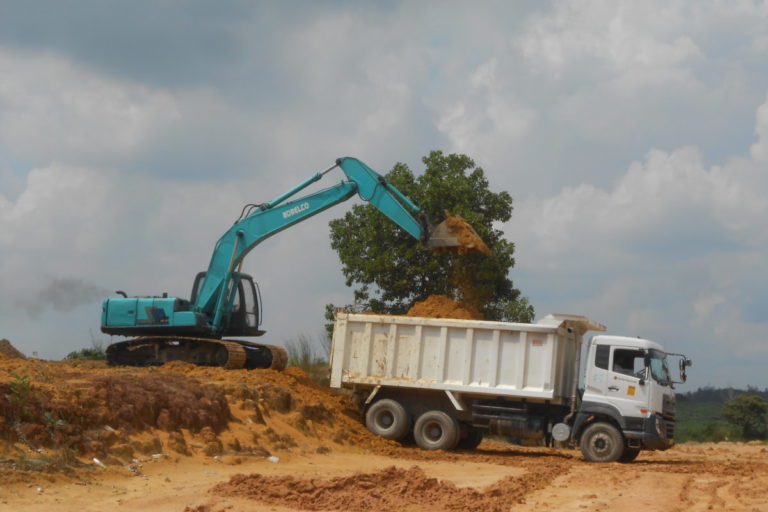 Land in and around the Balai Raja reserve has been excavated for road building. Image by Suryadi/Mongabay Indonesia.

Attempts by Husni to convince officials in the Riau provincial conservation department, or BBKSDA, have also failed to gain traction. Officials there said the road is outside the established boundaries of the Balai Raja reserve, therefore they have no place to comment. Husni says he does not accept this excuse.

“Elephants are also found outside the wildlife reserve and the Riau BBKSDA knows this very well,” he tells Mongabay.

Amidst the corruption scandals and protests by environmentalists, construction of the West Duri Ring Road has been temporarily halted since last year. However, part of the route is already open and has clearly disturbed the elephants’ habitat. Wetlands where the animals once bathed have been filled in, and several small enclaves of the forest where they were known to shelter have been cleared.

With their habitat continuing to shrink, the elephants are increasingly coming into contact with humans. Areas, where they would be seen about three times a year, are now being visited twice as frequently.

In August of this year, BBKSDA officials working with the police, Rimba Satwa Foundation, and others escorted 14 elephants out of a village and into a forested area that has been cut off by the road and other construction. To help mitigate the disruption to their migration patterns, elephant tunnels and a bridge have been included in the road construction to ensure the animals have access to adequate water sources and ample feed.

However, Husni says he is not convinced these bypasses will work, as attempts to lure the elephants across them with feed have so far failed. While some of the animals have approached the bridge, none have crossed; although several have crashed into the steel structure, cables, and retaining wall. 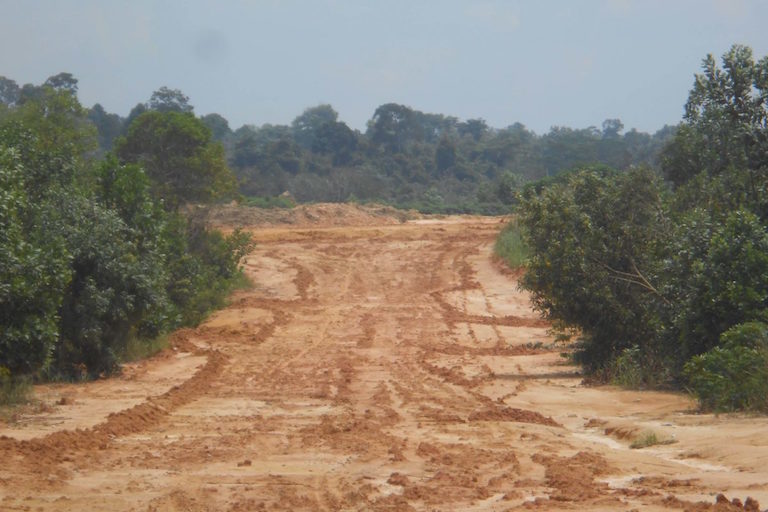 A segment of the West Duri Ring Road, where construction has been temporarily halted amid protests and a multitude of corruption scandals.  If completed, it will bisect the elephants’ remaining habitat. Image by Suryadi/Mongabay Indonesia.

The landscape around Jumar’s village has gotten more urban, with new houses, wider roads, and spreading plantations that have continued to replace the forest he once knew. Jumar says he sometimes misses seeing the elephants.

“Where did they go?” he asks, looking at the tofu factory across the road where he has frequently seen them in the past. “Why don’t they come?”

VR Used To Educate Youth About Nature In Arunachal Pradesh